A focus on those most in need: “Everything is harder when you’re in a wheelchair” 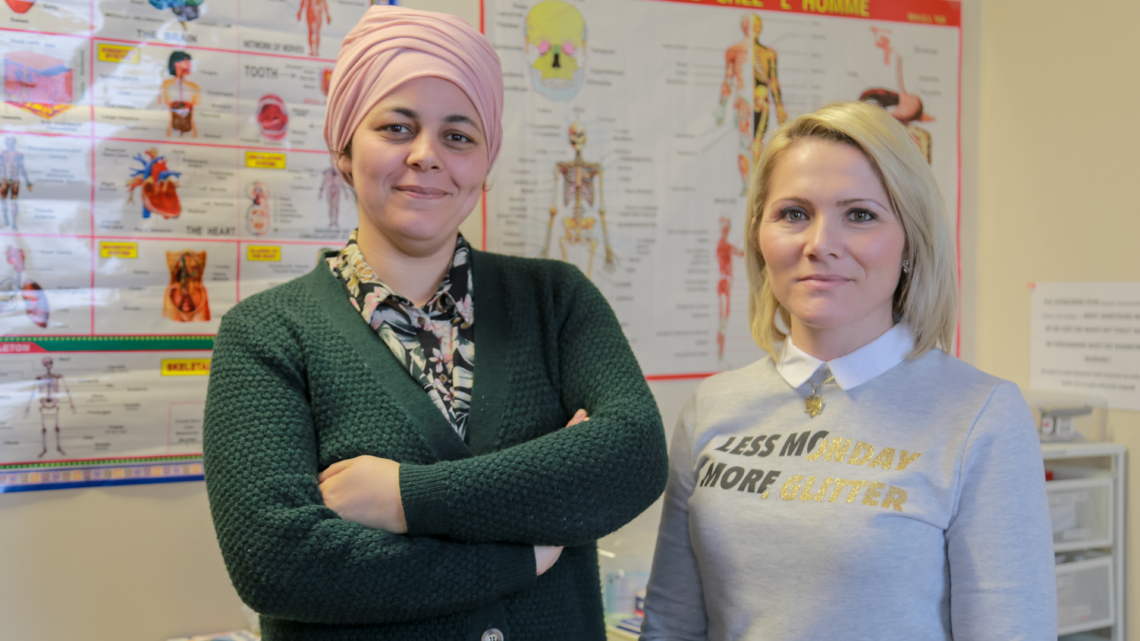 For some months, the reception center for asylum seekers at Scherpenheuvel has welcomed residents with specific needs, whether they be pregnant, autistic, or suffering from physical or psychological illness. At the center, these residents have access to adaptive care.

The first rays of February sun warm the Scherpenheuvel center. “Is it already spring?” asks Sadiya, leaning on her crutch. Sadiya had arrived in Belgium in August 2018 in the middle of a dry, sweltering summer. She was first received at the Broechem center, close to Antwerp, along with her husband, their two sons, two daughters, and their grandchild. “My older daughter is married, but her husband was kidnapped Iraq. We don’t know what has happened to him…”.

Because Sadiya had to undergo emergency hip surgery, she and her family were transferred to the Caritas center in Scherpenheuvel. At that time, she was in a wheelchair.

The surgery in January was a success. Sadiya now has a prosthetic hip and meets with nurses three times a week to work on her rehabilitation. Her wheelchair has now been replaced by a crutch, which allows her to move around slowly but surely. “Everything was harder in a wheelchair,” says Sadiya. “I always needed to ask for help. Now I can go out on my own to enjoy the sun.” 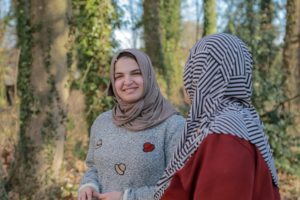 Maysun and her mother Sadiya.

In front of the imposing building that today welcomes these asylum seekers, a family is taking a final picture with the center’s caretakers before leaving. A little girl in a wheelchair is waiting with her mother for the car that will take them to the hospital in Leuven. She has spina bifida, a deformity caused by incomplete development of the spinal cord, which demands urgent care. She receives that care here, at Scherpenheuvel.

“Residents here have extensive health issues,” comments Hanane, a nurse at the center. Marisa, another nurse, nods in agreement beside her. “The doctor comes twice a week, but there was so much work that Caritas brought on a second nurse,” she says. “I am very happy to work for Caritas. 18 years ago, I, myself, was a refugee, and Caritas supported me. Things have come full circle.”

Hanane and Marisa’s office is the only one on the ground floor. The other management offices have been moved upstairs in order to offer residents rooms that are accommodated to their needs. The first room in the hallway belongs to Sadiya and her family. Mahmod[*], a 45-year-old Iraqi, lives a bit farther down.

“I have been in Belgium for two and a half months,” Mahmod explains. “Everyone is kind here, but at the same time I feel very lonely. Others take notice and ask me to go with them to the store, for example. I really want to move forward in life, fight off this loneliness, and try to go out more and be an active member of my community.”

The day everything changed

Mahmod’s family is still in Iraq. He left his wife and his children in order to protect them. “February 10th, 2013 is the day that everything turned upside down. Since then, I haven’t trusted anyone,” he says. “That day, I was attacked by an armed militia because I was selling alcohol. They said I wasn’t a good Muslim. I was terrified – especially by the thought that they could hurt my children.”

“I was shot in the spine. My leg was also in a bad state. I was in the hospital for 8 months. The militia thought I was dead, but when they found out I was still alive, they came after us again. I knew that if I didn’t leave Iraq, I’d be killed.”

I was shot in the spine. My leg was also in a bad state.

Dreams of the future

“I love working, and I will love to have somewhere to call home again,” continues Mahmod. “Scherpenheuvel is beautiful and peaceful. I will take any job as long as it’s doable in a wheelchair, maybe as a packer in a factory. I’d feel better if I knew what the future had in store.”

Two men with a stroller enter the center from the lawn that borders the central avenue of the building. The baby they are pushing isn’t the only one at the center: “We’re undergoing a veritable baby-boom,” explains Marisa. “The gynecologist and the hospital are 10 minutes away, so many pregnant women are sent to us from Fedasil. We provide them with a baby kit that contains clothes, a towel, and gauze pads, among other things.”

The Scherpenheuvel center can accommodate 144 people. Today, there are 55 children aged 0 to 19 living there. Despite this, it is a calm Februray morning. The children are at school, and others are in Dutch classes. They are building a future for themselves that is again full of uncertainties.

This name has been changed to protect the resident’s anonymity